On 30.07.2020, 13:50 h Central European Time, the Nasa space craft was launched to the red planet. More than 50 CEROBEAR bearings are installed in the rover “Perseverance”. The Mars Rover will be the fifth vehicle to move remotely on the planet. 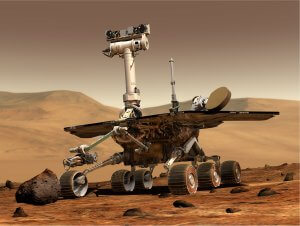 The Atlas-V rocket took off early in the morning (07:50 h local time) from Cape Canaveral in Florida for a flight to the red planet. On top of the rocket the American Mars Rover “Perseverance” is attached. More than 50 different CEROBEAR bearing types are installed in the approx. 3 m long and 2.7 m wide “Perseverance”. The different types of CEROBEAR bearings are installed in a wide range of critical mechanisms including: robot arm, sample acquisition systems, wheel actuators, helicopter release actuator, and many more. The CEROBEAR bearings are critical to the smooth running of the Mars Rover.

The bearings were especially developed for the NASA and its Mars Rover project and went through a long and intensive design and manufacturing process at CEROBEAR. “Perseverance” means “endurance”, which also applies to the development and design of exactly fitting CEROBEAR bearings.

The launch of the Mars Rover was planned for 30.07.2020, as the current favorable constellation from Earth to Mars creates good conditions. The flight to Mars will be approximately 500 million km. If everything goes according to plan, “Perseverance” will land in a crater north of the Mars equator in February 2021.

The task of “Perseverance” is to take soil samples from Mars. These soil samples will be brought back to Earth years later in cooperation with ESA, the European Space Agency. The analysis of the soil samples is intended to clarify whether there was any previous organic life on Mars.

CEROBEAR GmbH, on behalf of MinebeaMitsumi, donated 500 N95 protective masksgeneral
digitalPIONEER 2020 – CEROBEAR GmbH is one of the five companies in Aachen awarded as digital pioneersgeneral